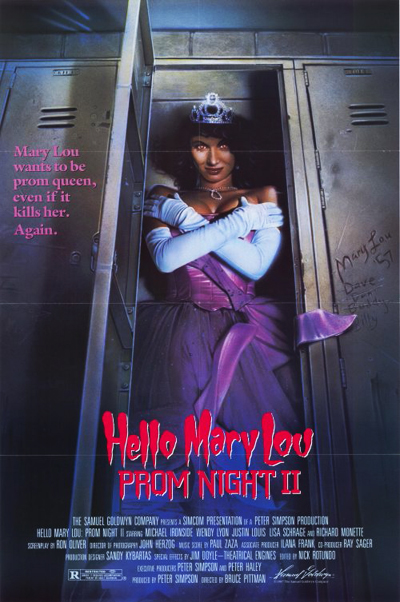 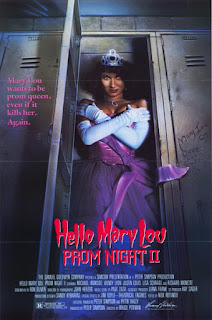 There's an early kill where this girl is about to get decapitated in a really cool way but then they trick you and end up just hanging her. Now a decapitation is way cooler than a hanging but I was thinking it made sense cuz you can make a hanging look like a suicide but you couldn't do that with a decapitation.  But then they THROW THE BODY OUT THE WINDOW. You can't hang urself and then jump out a window.  But what I was doing was trying to apply "logic" to this film.  That's my fault.

This film is bat-shit, bug-fucking, bonkers and I love it.  First off (and don't @ me) the original Prom Night is a bad movie. It's a generic slasher with a generic villain, and it's all around forgettable and I have no idea why Randy was so obsessed with it in Scream (he shoulda went with Terror Train). But for some unattainable reason 7 years after that weak ass film someone took a script that had nothing to do with the film Prom Night, changed the title, and slapped Prom Night II on there and ya know what? If that's the only reason we got to see this glorious madness then god  bless whoever made that decision.

The characters die in a slasher film order kinda way but the film plays more like Carrie meets The Exorcist if it was written by someone who only had the plots of those two films described to them... and was an insane person.

This movie is wild and there's a kill involving a gym locker that's just jumped to one of my favorite on screen deaths.  Fuck The Godfather Part II, Hello Mary Lou: Prom Night II is my new go to answer for a sequel that is better than the original.  And HML:PN2 is a million times better than Prom Night, I don't care how much Jamie Lee Curtis disco dancing there is.

Available on Shudder, Amazon Prime, and free on Tubi and Vudu with ads.