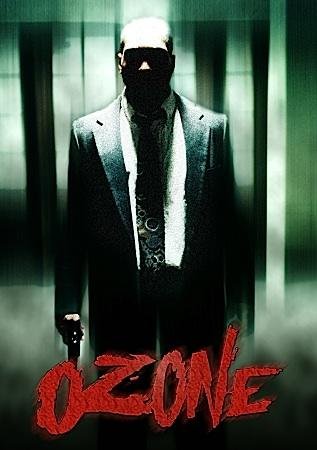 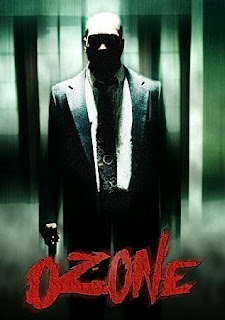 I hope you all like SOV horror cuz I ain't stopping anytime soon.  I got this dope ass book back at VHSfest III called Analog Nightmares which is a history of shot on video horror films and I've been going nuts tracking down as many as I can ever since.  And just my luck the Alamo Drafthouse in Yonkers was showing Ozone as part it's Video Vortex series. Plus I had a Victory Rewards coupon for a free pizza at Alamo so jack-fucking-pot.

As far as SOV horror goes this has to be one of my favorites.  Just straight up fucking gloopy gooey gross ass slimey sticky pus-filled exploding disgusting amazing low budget fx work.  Fuck, if you can't compete with the higher production values of studio films then at least go balls out with what you got.

After a drug deal gone wrong a cop gets pricked by a needle filled with some kinda new street drug which forces him to go on wild "trip". First I have no idea what the effects of the drug are.  Some people's veins bubble up and explode, sometimes their head explodes. Others turn into weird ass crusty zombie looking things, some which act like brainless zombies and some drive cars and head bang to metal music. And others well... not to spoil the bat-shit bonkers 3rd act but I'd just like to mention a scene where 2 people turn into gooey slime monsters AND THEN FUCK.

With the main character being a cop you'd think you'd have an easy built in narrative of the cop investigating but this dude doesn't really do any actually cop work and any important plot movement happens because a character tracked them down.  This the kinda ridiculously plotted yet amazingly balls out weird stuff that makes the SOV genre one of my faves.
If you haven't given the SOV horror subgenre a chance yet here is a perfect film to throw on, lower your standards, grab some beers and a few friends, and let loose.