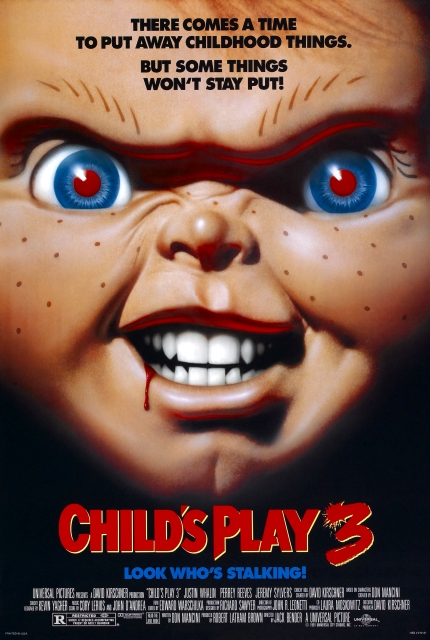 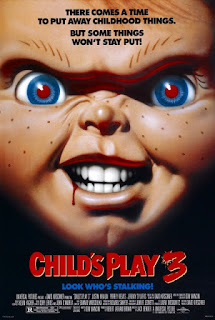 Child's Play 2 was an unexpected banger and while CP3 is not by any stretch a bad film it does feel like the franchise is started to spin it's wheels in place.  There are some changes from the previous films yet they're fairly superficial.

It's been only a year since the release of CP2 but this film jumps 8 years in the future.  This gives us an older Andy, now in a military academy.  While the change of scenery is nice it's still the same story just this time Chucky's found a new child he wants to enter... uh I mean...he wants the boys body... uh yeah you know what I'm talking about.

The new setting does allow for some cool set pieces involving a lot more characters.  Chucky's meddling results in a tragic round of wargames where he replaces paint cartridges with real ammunition.  I don't know if those paint bullets are a thing cuz all I know are paintballs and that sure ain't it but either way it's a cool idea.

The films biggest saving grace is that damn little foul mouthed fucker again.  I say it with each film but the fx of Chucky doll itself improve with each outing.  Apparently this is the first time where the animatronics are computer assisted and the improvement in his facial expressions and dialogue syncing is noticeable and top fucking notch.
Seriously the film is decent, its not gonna win any new fans but if you enjoy the exploits of the psychopathic plastic predator than it's more than worth checking out for Chucky's twisted charm.