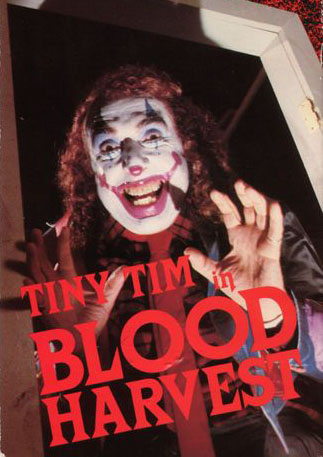 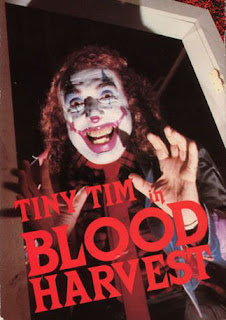 A slasher film where Tiny Tim plays an insane creepy as fuck clown.

I SAID A SLASHER FILM WHERE TINY TIM PLAYS AN INSANE CREEPY AS FUCK CLOWN!

Ok, well of course it's not good but no one is expecting this to be.  If you're not sold on that first sentence then there's no reason to watch this but if you got as excited as I did when you read that then you won't be disappointed.

Tiny Tim apparently can't memorize his lines or interact with other humans normally so like 90% of his scenes are him alone, singing in his recognizable vibrato, praying some weird as shit prayers I ain't never heard in Sunday school, or just rambling incoherently.  This was the role he was born to play.

The rest is below average slasher stuff. We got a bunch of slit throats and even more boobs (if you're into that). The cast is pretty small which kinda makes the decision to make this a "who is the killer" type film pretty dumb.

Also it's gets a little rapey at one point so here's your warning but there's no explicit rape scene or anything graphic.

Also for Six Feet Under fans it's got Peter Krause in his first ever film role.

And once more this time for the people in the back... I SAID A SLASHER FILM WHERE TINY TIM PLAYS AN INSANE CREEPY AS FUCK CLOWN!